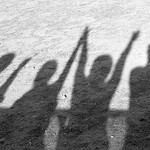 The opening verse of Song 5 declares that it is “for the leader; for the nechilot. The English translation is straight-forward: the song has been composed to be sung by the leader of the Temple musicians (the exact meaning of nechilot has been lost; flutes is a common editorial suggestion). The Hebrew, however, hints at another interpretation: the leader is God, Who is the conductor, afterall, of the entire orchestra of being.
The song is built upon a series of synonyms. Thus:
— v. 2: my words
— v. 3: my cry
— v. 4: my voice
— v. 7: speak lies
— v. 10: mouth, throat, tongue
— v. 12: sing
The references, as listed, clearly all pertain to speech; their culmination is song. Appropriately enough, since the singer begins his song with a plea to God, “Give heed to my words” (v. 2).
The references in verses 7 and 10, however, are harsh interruptions to the words of praise sung by the singer and by the troupe of the righteous.
Accordingly, another series of synonyms is strung throughout the song, which identify the characteristics of the wicked:
— v. 5: wickedness, evil
— v. 6: wanton men, evil doers
— v. 7: those who speak lies; bloodthirsty or deceitful
— v. 10: “For there is no sincerity in his mouth;
their innards — destruction; their throat
is an open grave; they make their tongue
slippery.“
— v. 11: plentiful crimes
The song ends with yet another group of synonyms, as the singer proclaims his belief that God will give refuge to the righteous. Clustered into verse 12: rejoice; sing in jubilation; exult. Thus:
“But let all who take refuge in You rejoice;
may they ever sing in jubilation
as You shelter them; and let those who
love Your name exult in You.”
The song, then, in its entirety, is composed of a careful building up of images of speech (the singer as he pleads for himself and for the righteous) and of hearing (God as the listener and judge).
The first line of verse 11 brings out clearly both the idea of speech and of judgement and of the connection between the two: “Hold them guilty, O God; let them fall by their own counsels”. The verse transforms the song dramatically: the song consequently becomes a court of law in which the singer asks God to pronounce a sentence of “guilty” upon the wicked. “Give ear to my words” — the opening of the song — thereby gains an added dimension. The singer is cousel; the wicked, the accused; God, the judge. (There is no defender of the wicked.)
The singer-counsel asks of God for no judgement but that of “guilty”. He, counsellor for both himself and the righteous, advocates only absolute judgements: the wicked must be condemned without mercy:
“.”
The reason for the jarring interruption of verses 7 and 10, to the singer’s string of synonyms for speech, is thereby explained: the wicked use their words, their voice — that which connects the
righteous to God — for purposes of destruction alone. Thus they sever all connection of themselves to God. Rebelling against God, their crime is that of treason (v. 11). Their allegiance is solely to death. The imagery is physical and graphic: their lies and false counsel slip on their tongues to reach deep within their innards so that their throats open into “an open grave” (v. 10). In the grave there is no song, no joy, no praise.
The singer thereby pleads his case: the wicked are to be cast out; the righteous to be sheltered and blessed. The image of the singer, asleep, ended Song 4.  Song 5 begins “in the morning” (v. 4)- a symbol of renewal and hope, and ends with [, and ends with his certainty that his voice has been heard. He “waits” (v. 4) for God to hear his cry, but with the surety of favour (v. 13).