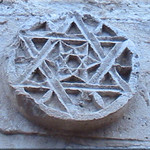 Song 35 is a wail more than a song, one rising out of the singer’s hurt and frustration at having been not only betrayed but vilified by the very friends he had supported and believed in. The idea inspiring the song is not difficult –the singer calls on God for support and rescue and asks, in closing, for God’s blessing upon himself and his supporters. But the structure which puts forth –indeed, animates– the idea is intricate and complicated, made up of intertwining images. The song is composed of a thrice-repeated pattern, each of the three repetitions formed of two distinct parts: the singer’s depiction of his enemies’ attempts to destroy him; followed, somewhat abruptly, by his praise of God Whom he extols as his rescuer and protector. Thus: the despair and pleas of verses 1 to 3 are followed by the praises of verses 9 and 10; of verses 11 to 17, by verse 18; of verses 19 to 26, by verses 27 and 28. And, remarkably, though the mood of the song is bitter and certainly not one of joy –the singer, after all, is seeking redress– nonetheless, the word most often repeated throughout the song is “rejoice”  — the vengeance of his opponents ultimately transfigured into the exultation of the just.