Song 34 is a praisesong that celebrates God Who offers shelter, not only to the holy ones but to the lowly and the broken-hearted. So that, while the song professes to be a means of teaching righteousness, it also emulates God by providing comfort. Though the 23 verses of the song divide easily into 2 parts, each part –especially the second– has within it several groupings, according to both tone and mood. The structure employs an alphabet form, but the 6th Hebrew letter, vav, is omitted. No explanation is given in the song for either the acrostic form or for the omission of vav, but, interestingly, it was on the 6th day, according to Genesis, that God created humankind. Could it be, then, that the entire poem –in its teachings about the relationship between God and humankind, and between one human and another– is, in effect, acting as the vav? 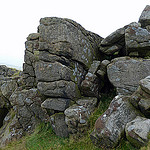