Psalm 8 describes the contrast between or oppositeness of God and humankind. An oppositeness that is immediately established in verse 2, with the juxtaposition of human frailty  — “infants and sucklings” — and God’s “strength”. And yet it is out of the vulnerability and helplessness of the infant that God’s strength emerges: “From the mouths of infants and sucklings, You have founded strength….” 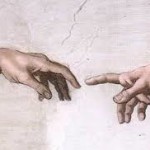 Verses 2 and 4 make clear the nature of that strength: it is composed of the majesty and splendour of God (v. 2) manifested in creation: “Your heavens, the work of Your fingers, the moon and stars that You set in place” (v. 4).
What becomes apparent is that it is in the very oppositeness of God and humankind that the singer perceives God’s splendour. Thus verse 2 celebrates God’s majestic name “in all the earth”, God’s splendour “set above the heavens”. That is, the material world, humankind’s habitation (“earth”), and that which is above and beyond it (“above the heavens”), are together reflections of God’s awesomeness. Verses 4 and 5 re-iterate: the moon and stars, set in the heavens (v. 4), contrast with “mortal man” (v. 5), and yet, despite man’s insignificence, God takes “note of him”, pays “heed to him” (v.5).
Verse 7 answers the question the singer poses, of why God should attend to humankind: God has given stewardship of “the works of [God’s] hands” to man, who thereupon both embodies and protects that work and, accordingly, man gains his value from that role and obligation. Verses 8 and 9 list those creatures which humanity is to protect:
8. sheep and oxen, all of them, and wild beasts too;
9. the birds of the heavens, the fish of the sea, whatever travels the paths of the seas.
In short, custody of the earth is the grant given humankind by the creator of the earth and of its creatures.
The praisesong begins and ends with the singer’s recognition of “How majestic is Your name in all the earth” (v. 2, repeated exactly in v. 10). It is as though the praises that God’s creation sings themselves sound out God’s name. Just as the form of the physical world exposes the imprint of “God’s fingers” (v. 4).
The metaphor of “God’s fingers” is perhaps the singer’s most powerful voicing of the contrast between or oppositeness of God and “mortal man”. The metaphor is not reflective of the singer’s hubris. He is not portraying God as man’s image. On the contrary. His question, why God should heed mere mortals, is both a rebuke — do not forget, humankind, that you are “little less than God” — and a reminder of responsibility — you are “little less”. By preceding his question with a description of the splendour of the works of God’s “fingers”, the singer emphasizes the fragility of the creations of man’s fingers but also their reflected glory.
That God should give to humanity custody over the work of God’s fingers is most probably the perception that inspires and transports the singer’s praises. That stewardship is a gift not only majestic but it is also one that gives awesome responsibilities and obligations to its recipients. Therefore, or so it seems the singer declares, mortal mankind must be aware that all of its actions reflect God’s name: on this note, the song both begins and ends.
Psalm 8:2,10) “O HASHEM, our Master, how mighty is Your name in all the earth.”
“יְהֹוָה אֲדֹנֵינוּ מָה אַדִּיר שִׁמְךָ בְּכָל הָאָרֶץ”