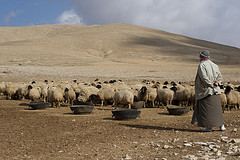 Click here to read “Psalm Twenty-three: Translation of the Song”

The metaphor that opens Song 23, of the shepherd and His sheep, evokes a sense of safety: a shepherd does not merely herd his sheep, as his name implies; his duty is to ensure their safety –to keep them from straying and to protect them from predators. The singer, however, does not identify himself as a sheep; that is, of course, implicit within the metaphor, but, more important, the absence of such mention indicates that he takes his identity solely from God, his shepherd. Nor is a flock mentioned in the song, though the nature of a sheep is that it is part of a flock. Certainly, then, the singer’s concern is only with his relationship with God, not with his community. His physical wants are satisfied  –“I shall not want” (v.1); he is provided both food and rest:. (v.2)
The choice of verbs, moreover  –“makes”, “guides”– makes clear that the singer is led; he does not choose his own direction but trusts that provisions will be granted him.
The next verse acknowledges that, indeed, he owes his very life to God, his shepherd. The usual English translation is, “He restores my soul.”  The Hebrew, however, is “nefesh”, meaning “breath”, rather than the higher entity the English suggests. Nonetheless, what the singer is recognizing is that his life is continually restored, ensured, by his protector.

The second line in verse 3, however, alters the metaphor. God still leads the singer but the paths are ones that only humankind can tread:
He leads me on pathways of justice
for His name’s sake. (v.3)
Justice or righteousness are human concepts; the singer is revealing his own humanity but he is also continuing to acknowledge that those concepts have been inspired by God. The puzzling “for His name’s sake” clarifies: God leads precisely because God is the guide to those precepts of righteousness and justice; those precepts name God.

In verse 4 the pronouns change, from the formal “he” and “I” of the preceding verses, to the more intimate “I” and “You”. Again, an acknowledgement of the singer’s humanity. Though God continues to lead him, the singer addresses “You” –an acknowledgement, that is, of relationship. The metaphor holds –the rod and staff are shepherds’ implements. But now the singer is no longer led. The tense of the verbs change from passive to simple present. He “walks”, he does not “fear”; he is “comforted”; God is “with” him  –a companion rather than the one who directs. Companion, however, does not mean equal; it is God who holds the rod and the staff, not the singer.

The first line of v.4 has, just as does v.3, a different intent in Hebrew than in English. The usual English translation is “though I walk through the valley of the shadow of death”, posing a complicated paradox:  either the valley, most likely life, is shadowed by death’s inevitability or the valley is part of, belongs to, death’s shadow –a much more ominous possibility. And, if death casts a shadow, is it, then. an entity capable of obscuring the light that would otherwise fall in fullness upon the valley? Another ominous possibility.
The English is unclear simply because the Hebrew is obscure: “tsalmawet” does not exist as a one-word form in the language. It may derive from “tsel”, meaning “shadow”, and “mawet”, meaning “death”. According to the translator Robert Alter, the philological assumption is that “tsalmawet” may arise from a mispronunciation of “tsalmut”, a poetic word for “darkness”. At any rate, both the Hebrew and the English describe a valley shadowed by darkness or death. And even if the one-word “shadowdeath” implies that death is itself a shadow, is, that is, without substance, still the valley is ominously affected by it. The bleakness of the image, whatever the reading of the Hebrew or English phrase, is assuaged, regardless, by the comfort of “You are with me” –the singer’s recognition of God’s presence:
Though I walk in the vale of death’s shadow,
I fear no harm,
for You are with me. (v.4)

Verse 5, harkening back to v.2, lists the physical comforts God’s presence provides the singer –“You set out a table before me”, “You moisten my head with oil, my cup overflows”: all the provisions –the oil, wine, and overflowing table– offering a bounty of prosperity and well-being to the human guest that is as vital an abundance as are the green pastures to the sheep.

Literary Analysis of Psalms is written by Dr. Victoria Rosenberg. The analysis is a product of the discussions between Rabbi Amram Maccabi and Dr. Rosenberg who weekly study a particular Psalm which inspires the analysis then posted on the website. Victoria Hammerling Rosenberg holds a PhD in English literature and has taught at Dalhousie and Mount St. Vincent universities.
Psalms
Font Resize
Contrast
Accessibility by WAH